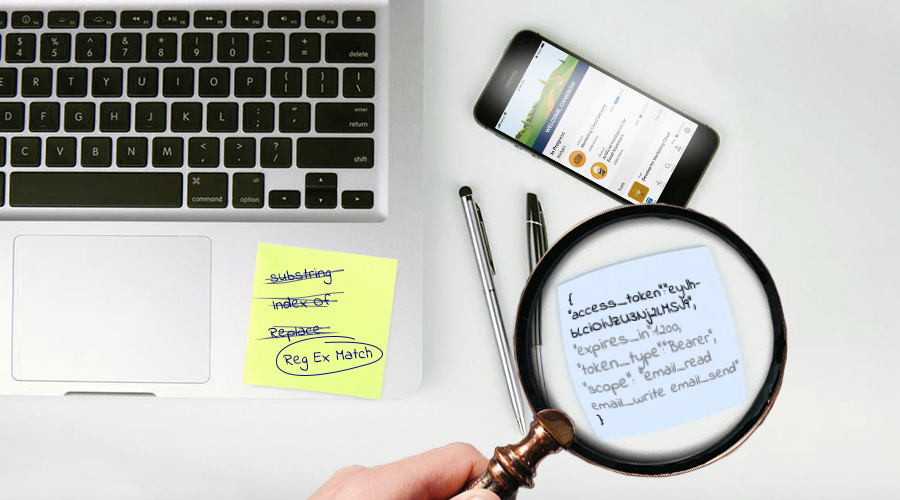 Regular Expression (RegEx) is an instruction set for matching and returning a part of a larger string, and is recognised by most programming languages.

AMPScript is unable to nativity parse JSON objects, meaning that string manipulation is the only way to extract the value from the larger object. As discussed in my OAuth 2.0 Access Token Quick Start guide, the SubString function is a quick way to return text if it’s location in the payload is reliable.

Since the order of objects in JSON payloads are not designed to be preserved, RegEx is a more reliable way of searching and returning values from a string. The following RegExMatch function is that I use to return the access_code from the V2 Token API:

If you need more detail on how the RegExMatch() function works, I suggest checking out the examples on The AMPScript Guide.

RegEx can take some time to get your head around as it’s a different syntax to most languages. To understand what the Regular Expression string above is achieving, I suggest using an online visual RegEx guide such as regexr.com or regex101.com to build and test your expressions. Copying the example JSON V2 Token response into either of these services and inspecting the rule set will give a far more detailed explanation to how this expression works; however in short, the expression above is returning everything that comes after "access_token":" and before the very next " character.

Due to the simplicity of this Regular Expression, you can amend it relitivly quickly for any value in any JSON endpoint. For example, the icanhazdadjoke.com API will return a random Dad Joke every time it’s requested:

We can alter the RegEx code from earlier to return the value of the “joke” object in the JSON response above:

Note that the Dad Joke API returns a space after the : character, so I used the .* wildcard to indicate that anything could optionally appear there.

Regular Expressions are a very powerful and can be used to great effect if you understand how they work. This is a language syntax worth spending some time learning!